MiG 35 The New Formidable Challenger In The Skies 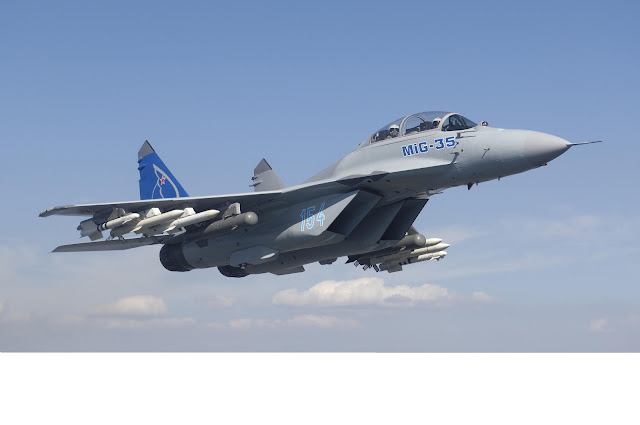 In India owing to a much higher price than expected, only 36 MMRCA category fighter jets have been contracted to be obtained in the form of Rafale out of the required number of 126 MMRCA category of fighter jets that are required by IAF. Thus another opportunity presents itself for IAF to evaluate fighter jets from companies of other countries. Although the final decision rests with IAF to determine the fighter jet that it evaluates to be suited to its requirement ; MiG 35 of RAC MiG from Russia , a 4++ generation fighter aircraft, holds many positives over the fighter jets in the same category and should be positively taken into consideration while obtaining the remaining number of 90 MMRCA category of fighter jets by IAF. A brief explanation citing quite a few technologies incorporated in MiG 35 giving an insight into its capabilities is attempted in the write up that follows.

MiG 35 is a twin engined fighter aircraft which is a completely new variant having scant similarities with MiG 29K/KUB was very recently offered to India for naval operations as well as for acquisition of multi-role fighter aircraft for Indian Airforce. The dual seat version of this 4++ generation aircraft is MiG 35D. This fighter has greatly improved avionics and weapons systems and is capable of shooting down attack aircraft & cruise missiles and destroy ground targets as well. Its radar is AESA radar which is technologically better and efficient than the powerful PESA radars , its optical locator station (OLS) enables the fighter jet to target independent of ground-controlled interception (GCI) systems and along with BINS-SP2 strapdown inertial navigation system which allows MiG 35 to navigate in the absence of satellite, land-based radar stations and offshore navigation systems gives it the capability to conduct search , track and attack operations without the directives of ground radar stations.

Other new features are advanced information-sighting systems, adaptability of onboard firmwares with both Russian and foreign weapons systems along with integrated defence systems for increased combat survivability. The SOLO (Stantsiya Obnaruzheniya Lazernogo Oblucheniya) is a laser warning device designed by NII PP has two sensors suites located on the wing tips. It is capable of detecting the tracking of the aircraft with a laser range finder from a distance of 30 kilometers. MiG 35 uses very effective avionic systems like MSP 41KE active jammer POD and ELT/568(V)2 Self Protection Jammer (SPJ) for self protection. 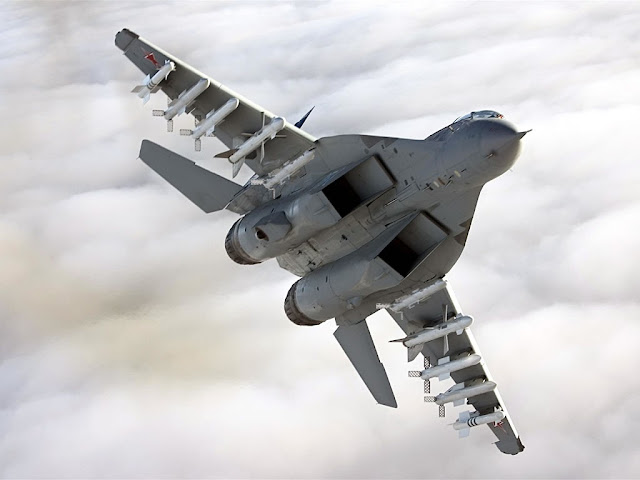 MiG 35 With Its 10 Hard Points Loaded 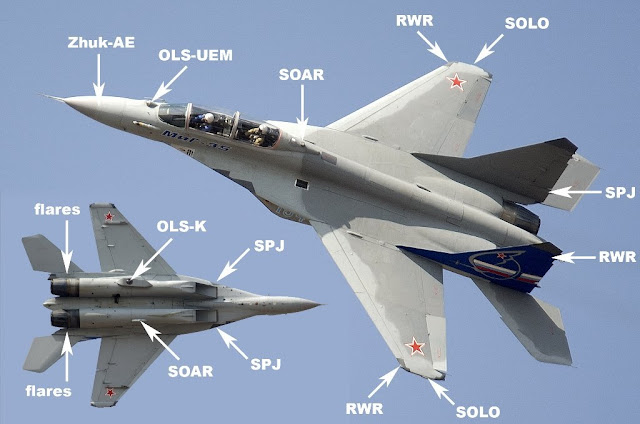 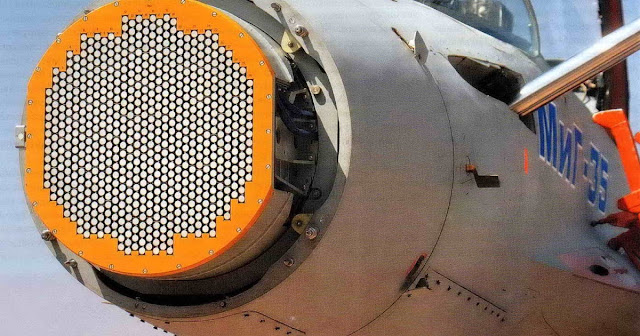 This radar is all-weather effective , has a wide range of operating frequencies, it provides significant resistance against electronic warfare giving it the capability to operate in ECM-heavy environment. It has a detection range of 160 Kms for aerial targets and 300 Kms for ships. This radar is capable of tracking 30 targets and target 6 aerial ones and four ground targets simultaneously. 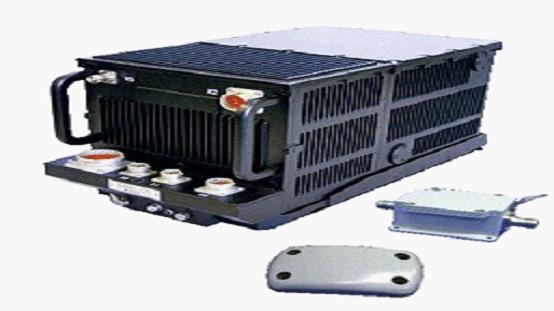 This system autonomously processes navigation and flight information , also determines position and motion parameters with the help of built-in laser gyros and quartz accelerometers in absence of assistance from satellite navigation with default integration with GLONASS. One unit of this system is expected to have an operation life of 10,000 hours which is twice compared to the same type of navigation systems other than BINS SP2. This also aids the fighter jet in network centric warfare involving air,land and maritime operations.

This engine is 7 percent more efficient than previous version of RD33 engines for usage of new technology , it is smokeless and has reduced infrared and optical visibility. Introduction of KliVt swiveling thrust vectoring nozzles improve the engine's efficiency by 12 to 15 percent giving it equivalent or better maneuverability than Su 30 MKI and F22 Raptor. In fact the thrust vectoring nozzles of RD 33 MKV variant of the engine has all-aspect thrust vectoring and enables MiG35 to fly at very low speeds without any limitation of angle-of-attack maintaining the controllability of the aircraft in zero-speed and negative-speed (tail forward) for much more sustained periods than 2D thrust vectored engines.

This passive search-and-track sensor system has capability to detect emission from stealth fighter jets. OLS works like the human eye by capturing pictures and analyzing them to detect possible targets. This OLS system which is complex if powerful optics with IR vision is reported to aide pilots to detect US stealth fighter jets. This OLS system is made of Leuco Sapphire giving it ruggedness against damage by dust particles striking at mach speeds and far better reliability of signal propagation from the system.


A Few Words On Leuco Sapphire OLS Of New WaveLength: 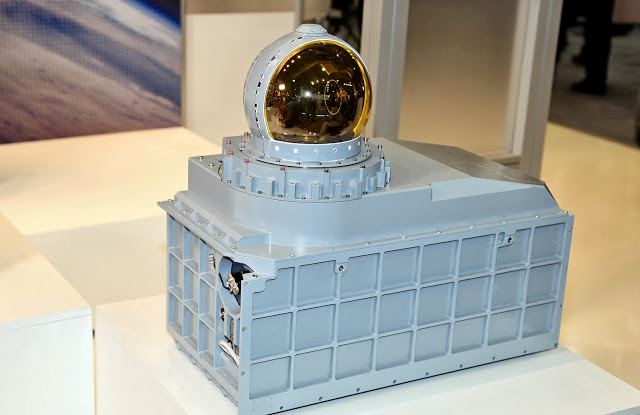 The latest optical locator system (OLS) on MiG 35 that uses leuco sapphire , the next hardest material after diamond, enables propagation of uncorrupted IR signal in place of glass that is normally used in prevalent OLS systems. OLS helps in detection of aircraft independent of radar and does not have electromagnetic emission of its own and hence the position of the IR emitting aircraft remains undetected. The OLS works like a vividly enhanced eye which continually captures the picture to be processed by the built in computing systems of the aircraft. The new OLS developed in Russia along with leuco sapphire uses short wave band of IR emissions which have enabled increased sensitivity by several times along with significant improvement in detection range. It has detection range of 15 to 55 kilometers for airborne targets. Such OLS are considered to help detect even the most stealthiest of aircraft that are prevalent in most revered air forces of the world. Detection of target by OLS can trigger the release of the desired weapon upon pilot's command independent of the radar in the aircraft. 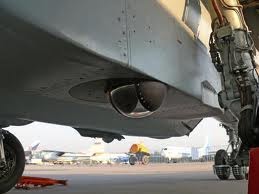 This OLS system is designed to search, track and target on land and seas. It can detect and track a battle tank on the ground at a distance of 20 Kms and an object of the size of an aircraft carrier on sea at a distance of 40 Kilometers.

It is a threat detection system for MiG 35 and is fitted on the gondola and a second one on the top of fuselage of the aircraft. It detects rocket launches and shows the direction of the incoming threat. It is capable of detecting Stinger/Igla missile from 10 Kms , air-to-air missiles from 30 kms, and big surface to air missiles from 50 Kms. It is developed by NII PP institute of Russia. 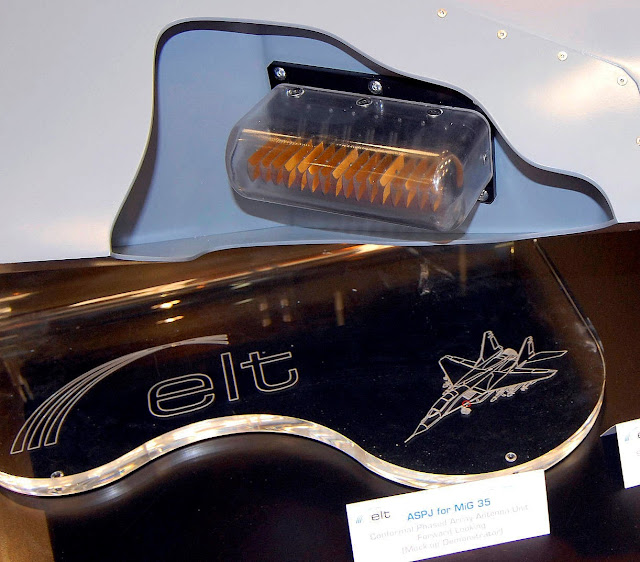 Compact jamming pod MSP-418-K is developed for individual and collective aircraft protection by means of active noise and interference generation to deceive and counteract against radio electronic equipment used in air defence, artillery or any other ground complexes. It implements noise generation and complex interference with DRFM technologies which implements digital signal processing and interference generator by noise generation and generating complex interferences with a programmable structure thereby providing an independent two-channel reception, processing, and emission of the original radar signal based on DRFM technology. It has the capacity to instantaneously measure the received radar signals for panoramic radar signal detection in G-J range. DRFM technology is a broadband signal processing with real-time signal processing and programmable features and it implements recording and reproduction of the received radar signals.

This jammer has evolved from collaboration between Russian MiG and Elettronica of Italy and it provides self defence from radar controlled anti-aircraft guns.

In comparison to the likely adversary in the form of Chinese Naval Forces Fighter Jets Shenyang J15, which is a derivative of Su 33 type fighter jet ,MiG 35 exceeds Shenyang J15 in quite a few parameters . MiG 35 exceeds service ceiling of J15 by 500 meters, rate of climb by 84 m/s, maximum speed by 100 Kmph, thrust-to-weight ratio by 0.20 and maximum maneuverability by 2g. All these aerodynamic factors combined with the advantage of ZUKH-AE AESA radar ,advanced OLS and all-aspect thrust vectoring engines give MiG 35 a significant edge over the Shenyang J15 with regards to maritime operations.

MIG 35 exceeds F16 in highest speed at altitude by mach 0.25, combat radius by 450 Kms on internal fuel , service ceiling by 2260 meters, rate of climb is by 76 m/s, maximum maneuverability by 1g along with all-aspect thrust vectoring RD33MKV engine which gives MiG 35 unlimited angle of attack. All these aspects should be considered carefully before deciding to obtain an all-weather fighter jet.

Acquiring a completely new aircraft in large numbers will call for absolutely new logistics support, maintenance nightmares for multiple fighter jets of varied make and up keeping of these newly acquired fighter jets to maintain proper percentage of availability to have effective deterrence with the newly commissioned fighter jet along with its compatible missiles and munitions. Indian Air Force have inducted substantial numbers of MiG 29 and is in the process of upgrading them and India Navy have already inducted a substantial number of MiG 29K variant ,so, MiG 35 being a ultra advanced 4++ generation variant of the same MiG series of fighter jets the ready feasibility for Indian Airforce and Navy would be to opt for MiG 35 for MMRCA and carrier based operations respectively along with TOT to manufacture it in India after a few of these have been inducted directly from Russia through Govt. to Govt contract.